Are Near Death Experiences Real? 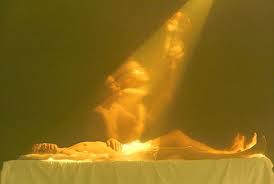 Near Death Experience - A Satanist commits suicide and has a terrifying audience with the devil himself. A renowned neurosurgeon has a transcendental near-death experience (NDE) in which he spent a week deep in coma from an inexplicable brain infection. A rock and roll loving orthopedic surgeon is hit by lightening, dies, has an amazing NDE and returns with a new talent for playing and writing classical music. These are just some of the incredible stories in three new books on near death experiences by author John J. Graden.

God - Graden, a member of the Million Dollar Authors� Club and Self-Publishing Hall of Fame says he�s been fascinated by NDEs ever since his mother told him about her own experience. He says, �She was undergoing surgery when she suddenly realized she was watching the operation while floating above the surgery table. She told me she was never afraid of death after that. It was a wonderful feeling.�

Graden wanted to know more but also saw there was a fair bit of skepticism on the topic. He says, �I thought, okay. If you want to know if NDEs are real, who better to ask than doctors who have had their own?�

"Near Death Experiences: Doctors and Scientists Go on the Record About God, Heaven, and the Afterlife" shares the stories of 10 people of science who had NDEs. Most were atheist prior to the NDE. Are they still atheists?

"Near Death Experiences in Hell" is the bone chilling stories of 10 people who died and went to hell and back. Graden says, �What�s interesting about these stories is the hell is far worse than I�ve ever heard it described prior to this. One of the subjects said, �Hell is so bad you would not want your worse enemy to experience it. Hitler, Bin Ladan it doesn�t matter. I can�t even be around someone who even says, �go to hell,� anymore�

"Near Death Experiences of Suicide Survivors" was inspired by an interview Graden heard with a leading NDE researcher. Graden says, �This doctor has interviewed thousands of people who have had NDEs in his resuscitation hospitals. Without elaborating, he made a clear point. NDEs are usually wonderful with the exception of suicides. He said suicide survivors tell of a much less pleasant near death experience.�

Each book is designed to be a quick read without much of the biographical padding found in more traditional books on NDEs. Since most NDEs last just a few minutes, Graden says he was more interested in getting to the main story and the aftermath.

Graden plans for at least one more NDE book. This time the focus will be on children who have had an NDE. Graden says, �Children who die and then return, tell mind boggling stories that simply cannot be explained away. They describe what their parents were doing while they were dead; what was said; and who they saw on the other side. It�s humbling to say the least.�

Graden says writing these books has been a great experience for his understanding of God and the after-life. He hopes his readers have the same �shared reading experience.�

This website was built with Webnode
You can also have an impressive website for free!
Try it out